1,2,3,4,5
Autumn is here. Usually I love its crispness & glorious colours but instead at the moment I am feeling particularly grey & low… I think it’s a general lack of sunshine!
Come on blue skies, I need you 🙂

So politics isn’t something that I would ever usually talk about. To be quite honest it’s something that I don’t really pay any attention to. To be honest I’m 32 years old & I’ve never voted. As a child I grew up under the Conservatives & Maggie T & as an adult I’ve lived my life under Labour with the charismatic American-loving Tony Blair & the not-so Gordon Brown. In my own reality there hasn’t been a huge difference between the two. Margaret Thatcher provided us with a strong female role model, privatisation and a decline in the manufacturing industry, New Labour finished it off for her. Tony Blair’s ‘New Labour’ didn’t seem that different to the Conservatives before them to me. It’s only now, after a few years struggle that you see the evidence of Labours social ‘for the people’ policies… but is it too late?

This year, with the televised Leadership Debates, interest has surged, particularly against younger people & those in my age group who haven’t really paid attention before. Nick Clegg is hugely popular & the Liberal Democrats are a force to be reckoned with. I’m quite lax & never really watch the News but now I’m glued to the screen & I’m buying the paper every day! We have so many issues to address right now in this country & people want change but it’s very difficult to figure out who’s really going to give us that. And will it be for the better or for worse?

There is so much that needs addressing right now… immigration, classroom sizes, unemployment, the recession, illiteracy, poverty, outsourced businesses, housing, the economy… & on a personal level, who will benefit us more? Mr J runs his own (small) business, we rent because we can’t afford to get on the housing ladder, we haven’t got children yet but are planning to in the next year or so, I earn over £20k so am likely to get hit by Labour in taxes, but Mr J’s small business will be a financial struggle under the Conservatives… & the Lib Dems? I have absolutely no idea! Well on Friday we’ll find out whose turn it is to run the country… I have butterflies in my tummy!

(all pictures sourced from weheartit)

So how amazed was I when I logged in & saw that the lovely Rebecca had left me a comment to tell me that she had picked me for a Beautiful Cherry On Top Blogger Award! (She has amalgamated the Beautiful Blogger Award with the Cherry On Top Award)! I would like to pass it on to the following 3 as I think that they are all beautiful blogs… 1. Kisses and Cross Stitches…. 2. Holy Comfort! & 3. Postcards from Dreamland. Thank you Rebecca it is so nice to get these! Speaking of other bloggers, todays photo colourfest is for Chelsea (favourite colour = purple on lime green) & Alex (favourite colour = yellow) hope you enjoy it girls! My second proudest moment this week (after getting theses awards of course!) was on Thursday evening when I cooked dinner for Mr J. He loves meatballs & I found a great recipe for Moroccan meatballs so I had a go & they turned out yummy! I served them with cous-cous stuffed peppers & a salad of Rocket, Watercress, Parsley & Coriander. The meatballs themselves were simply minced lamb, garlic & parsley but I simmered them in tinned tomatoes, ground cumin, ground coriander & cayenne pepper with more garlic (I love garlic!) & fresh coriander & they tasted great. So so simple & Mr J was over the moon! I could almost be a Domestic Goddess 😉 PS. To celebrate my surprise award I’m going to have a surprise giveaway! I shall pick a winner from those of you that leave a comment on this post to receive a surprise bundle through the post… Good Luck! xox

So I have an obssession with stripes, and polka dots, & knee high socks and bobbed hair & rock chick tees… 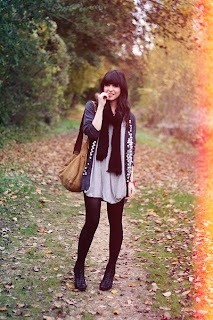 and scarves and tights… these are a few of my favourite fashion finds… I love the casual indie thrown-together boho look but I also adore the retro put-together 40/50/60’s styles that you find… &
right now I’m LOVING yellow!

(All pics via weheartit)